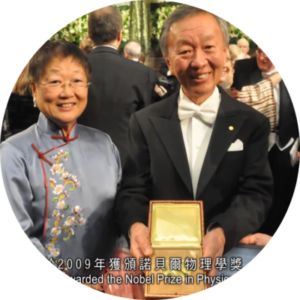 Ms May-Wan Wong 黃美云 , more publicly known as Gwen Kao, was born in the UK in 1934 to immigrant parents from China’s Guangdong Province. The Wong family survived the WW2 German bombing raids of London – her childhood memories of that now revived by the horror of the destruction in Ukraine!

The free schooling systems of UK of the time enabled academically endowed minds to enter grammar schools, the gateway to higher education. Gwen was fortunate to also gain financial support that enabled her to graduate with a B.Sc from University of London.

At home, the family spoke the village dialects of the hometown of Hoi Ping. It is an accent that caused much amusement in HK when she finally came to visit her parent in-laws for the first time in 1965. She had met in London a co-worker, Professor Kao Kuen, whom she married in 1959.

The career of Professor Kao is well documented. His wife became an experienced house mover, packing up and moving home many times. Her career as a system analyst working with the first generation computers was disrupted. The progress of IT moved so fast at that stage that any absence from the field made it hard to re-enter. She tried her hands at many other occupations but finally became the dedicated household manager, freeing her husband to devote himself to his career full-time.

A fortunate outcome – now that Prof Kao has Alzheimer’s, the management of family affairs continues in the experienced hands of Gwen. She is now also much involved with the work of the Charles K. Kao Foundation for Alzheimer’s disease.